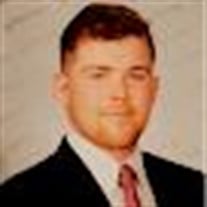 In Loving Memory Joshua Ryan Jarvis, 21 gained his wings on June 29th, 2020. A son, brother, grandson, cousin, uncle friend, partner and A Proud MSU graduate. Joshua was always smiling, had a kind heart, loving, caring, polite and understanding. He was so strong, dedicated, hardworking, supportive and such a good friend to so many. Joshua was so full of Love and Laughter and has so much love for his family. A celebration of life will be held on his birthday, July 24th from 12-8pm at Silver Lake. Pinckney Recreational Park is a state park located at 8555 Silver Hill Rd, Pinckney, MI 48169. Joshua was survived by his parents Don and Amy Skelly (Currier-Jarvis), George Jarvis Jr and Anne Bowers. His siblings Amber Jarvis, Tecole Ruiz, Eric Beckman and Jenny Price. His grandparents Cliff and June Olson and Barbara Jarvis. His best friend Chris Jiordano and his soulmate Sara Ridenour. Joshua was born on July 24th, 1998. He resided in Bellville where he was involved in several sports, boy scouts and made many memories and friends. He graduated from Crestwood high school in 2016 where he played football and found his love for wrestling. He was so proud and dedicated to his wrestling family. He won many medals, reached his 100 wins and went to district finals. We will always be proud of Joshua for all his accomplishments, there were so many. His biggest was graduating from MSU Eli Broad College of Business in May of 2020 with a Major in Business Management. Shortly after Joshua graduated he moved to North Carolina. He followed his heart to be with his soul mate and to start his new career. Unplanned and unexpected tragedy took place and he took his own life. He felt lost in this huge world with no place to go but God took care of him and had other plans for him. He was needed elsewhere. Until we meet again. We will always love, forever miss and never forget Joshua Ryan Jarvis.

The family of Joshua Ryan Jarvis created this Life Tributes page to make it easy to share your memories.

Send flowers to the Jarvis family.