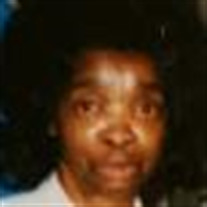 Mrs. Miggie Jean Chappell Waller transitioned from Earth to Reward on Wednesday, January 27, 2021 in Maryland. She was born in Johnston County, North Carolina. She is a former school teacher and last taught in the District of Columbia Public School System. She is survived by a son and a daughter, two sisters, one brother, and many nieces, nephews and other family members. Her arrangements are as follows: 1 PM Graveside Ceremony prior to Entombment at Selma Memorial Gardens, Selma NC. There will be a Public Viewing that will held on Friday, February 12, 2021 from 5-6 PM at the Funeral Home Chapel in Selma. Miggie Jean Chappell Waller, a daughter, a mother, a sister, and an educator. Miggie Jean transitioned this life on Wednesday, January 27, 2021, after a short illness. She was born on March 18, 1937 to the late Jeremiah Chappell. and Bessie Watson Chappell. Born in Johnston County, North Carolina, she was the seventh of ten children. Miggie Jean is a graduate of Cooper High School, Clayton, NC in 1956 and she graduated from The Agricultural and Technical College of North Carolina, now known as North Carolina A&T University, in 1960. She received a Bachelor of Science degree in Home Economics. While in college, she became a member of Zeta Phi Beta Sorority, Inc., and the Panhellenic Council. She was a Phi Beta Sigma Queen and Dean of Pledges. She was also an usher and senior counsel amongst other activities. She furthered her education and she went on to earn a Masters of Science in Home Economics from Hollins College in Roanoke, VA (now Hollins University) in 1981. Upon her graduation, she moved to Roanoke, Virginia and became an educator in the Commonwealth of Virginia Public School System. There she met and married Thomas Anthony Waller, Jr. and from that union begot two children, Anthony Valtez Waller, and Tamika Diane Waller. She had a special niece, Ava Livas, who resided with her and her children in Roanoke until she graduated high school. Miggie Jean loved being a schoolteacher and she was one of the best at it. She was a certified instructor in North Carolina, the Commonwealth of Virginia, and the District of Columbia public school systems. She is preceded in death by her parents and the following brothers and sisters: Nina Mae Chappell Barnes (James), Lester Chappell, Albert Chappell, Columbus Chappell, Catherine Chappell Sanders, and Edith Chappell McFarland. She leaves to cherish her memory: two children, Anthony Valtez Waller of Roanoke, VA and Tamika Diane Waller of Upper Marlboro, MD; two sisters, Gracie Chappell Hill and Dorothy Chappell Johnson (Arthur Lee), both of Upper Marlboro, MD; one brother, Jaycee Chappell of Queens, New York; two sister-in- law, Esther Chappell (Lester) of Raleigh, NC and Lucille Chappell (Albert) of Smithfield, NC. She also leaves a host of nieces, nephews, relatives, and friends. Zoom information for Virtual Atteendance: Topic: Celebration of Life for Miggie Jean Chappell Waller Time: Feb 13, 2021 12:30 PM Eastern Time (US and Canada) Join Zoom Meeting https://us02web.zoom.us/j/88266001247?pwd=MlpmSDd5YlFWZm5kUStEN0ZzZGd4UT09 Meeting ID: 882 6600 1247 Passcode: AuntJean21 One tap mobile +13017158592,,88266001247#,,,,*4144965255# US (Washington DC) +16465588656,,88266001247#,,,,*4144965255# US (New York) Dial by your location +1 301 715 8592 US (Washington DC) +1 646 558 8656 US (New York) +1 312 626 6799 US (Chicago) +1 346 248 7799 US (Houston) +1 669 900 9128 US (San Jose) +1 253 215 8782 US (Tacoma) Meeting ID: 882 6600 1247 Passcode: 4144965255

Mrs. Miggie Jean Chappell Waller transitioned from Earth to Reward on Wednesday, January 27, 2021 in Maryland. She was born in Johnston County, North Carolina. She is a former school teacher and last taught in the District of Columbia Public... View Obituary & Service Information

The family of Miggie Jean Chappell Waller created this Life Tributes page to make it easy to share your memories.

Send flowers to the Waller family.