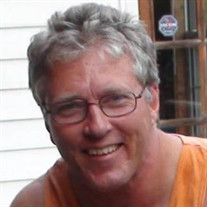 Michael (Mike) Joseph Bray, age 62, died Monday, 27 September 2021, from ALS (amyotrophic lateral sclerosis) with his wife Lori by his side. As a devout Christian and an adamant believer in God’s healing power, Mike fought hard and long but finally God called him Home to God’s Rest. Mike was born August 1st, 1959 in Dover County, New Jersey, and grew up in Toms River, where he soon found his first love... racing dirt bikes. He discovered his second and truest love, Street Rods, working alongside his brothers, Bob and Jeff, at their father's used car lot. The faster and more colorful the better. His first rod was a 1957 Studebaker that he restored when he was 15 years old sporting bright yellow and orange flames over a brown body. This first restore led to countless subsequent Muscle Cars, each wilder and more spectacular than the last. In 1994, Mike worked at Mace Autobody in Smithsburg, Maryland where he met his wife Lori Rinckel when rescuing her from a poorly repaired 1990 Mitsubishi Eclipse. Lori's first glimpse of Mike was his feet sticking out from under the dash – truly love at first sight. They remained together for the rest of Mike's life. Being an accomplished man of passion with cocky confidence, in 2000 Mike realized his lifelong dream and opened his own autobody repair shop, Brays Advanced Collision in Bartonsville, PA, a business that still thrives today managed by close friend Steve Jurasits. Mike and Lori soon moved to the warmer climate of Johnston County, North Carolina, where Mike opened two additional businesses: Oak City Autobody and Value Plus Auto Sales in Four Oaks. Initially local law enforcement officers were skeptical of Mike and his ‘burn outs’ with each subsequent Muscle Car, but he eventually won their respect with his honest, strong, work ethic, and a good-hearted positive attitude - not to mention buying lunches and supporting the local community. Mike loved to share and preach God’s Word and pray over anyone in need of healing. He was a man of his word, a loyal friend, and a loving husband and father. He is survived by his wife, Lori Rinckel; son, Michael Bray Jr; sister, Debra Armstrong; and brothers, Robert and Jeffrey Bray. A Celebration of Mike’s life is being held on Monday 11 October 2021 at 7:00pm at New Bethel Church, 1110 Buck Jones Rd, Raleigh, NC 27606. Another Celebration of Mike’s life is being held on Saturday 16 October 2021 at 2:00pm at Fries Funeral Home, Inc. 47 N. Park Ave. Mercersburg, PA 17236. The family will receive friends one hour prior to this service at Fries Funeral Home Inc. To honor Mike, in lieu of flowers, please make donations to New Bethel Church designated for India Missions (https://www.newbethelnc.org/give)

The family of Michael Bray Sr. created this Life Tributes page to make it easy to share your memories.

Send flowers to the Bray family.