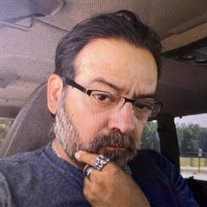 FELIPE LANDIVAR'S OBITUARY Felipe Landivar, 59, of Smithfield, North Carolina, passed away on April 26, 2022. Felipe was born on October 26, 1962 to Vicente Landivar Delgado and Hilda Gamarra Ruiz in Guayaquil, Ecuador. After Felipe graduated from the Admiral Illinworth Naval Academy, in Guayaquil, Ecuador, he began to work for his father in sales. He moved to the USA in 1985 where he met his wife, Yanira Peguero in Union City, NJ. Felipe and Yanira went on to have their son Philip Landivar. He lived in Smithfield, North Carolina where he often liked to go bike riding, off-roading, and spending time with his two sons Jeffrey and Steven. Felipe was predeceased by Vicente Landivar Delgado and Hilda Gamarra Ruiz. He is survived by Yanira Peguero, his son Philip Landivar, Jeffrey, and Steven Fradera, and his sisters and brother, Diana Cevallos Gamarra, Maria del Carmen Landivar Gamarra, Rosa Delia Landivar Gamarra, Vicente Landivar Gamarra, and Mariana Landivar. Services will be held at Lori’s Funeral Home in Smithfield-Selma, NC on Monday, May 2nd, 2022, at 12:30pm.

The family of Felipe Landivar created this Life Tributes page to make it easy to share your memories.

Send flowers to the Landivar family.