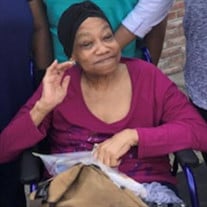 Funeral Services are slated for Tuesday, December 10, 2019 at Lori’s Funeral Home Chapel. Final details are as follows: an 11:30 Visitation at the Funeral Home Chapel and the Funeral Ceremony to begin at 12 Noon on Tuesday. The burial will take place at Mt. Hope Cemetery in Raleigh. Edith Rand Tharpe, 76, of Raleigh, NC went to be the Lord on Tuesday, December 3, 2019. She passed away peacefully at Wake Medical facility with her family by her side. Edith was born to Ivie Rand and Buster Bridges on May 30, 1943 in Raleigh NC. She attended Wake County Public School System. She later received her General Education Diploma from Wake Technical Community College, Raleigh NC. She made her career with the Roman Catholic Diocese of Raleigh, Sacred Heart Cathedral where she worked faithfully until retirement. Those who knew Edith would say, she was a mother and nurturer, hardworker, the life of the party, a person that would speak her truth and devoted to her family. The only thing bigger than her personality was her heart! Edith leaves to cherish her memory sisters, Daisy Partridge and Darlene James of Raleigh, NC; Four children, James A. (Keisha) Tharpe of Raleigh, NC, Constance L. Tharpe of Zebulon, NC, Alyse Y. (Isabel) Tharpe of Raleigh, NC and Kitana S. Rand of Zebulon, NC; stepson Rico (Stephanie) Tharpe of Washington, DC; grandchildren, Clarissa Gill and James A. Tharpe, III of Raleigh, NC; Norman Morgan devoted father to her children; and Ernest Bynum to whom our family extends our love and thanks for his years of devotion and love. Edith is also survived by a host of loving nieces, nephews, cousins, relatives and friends. Edith was preceded in death by siblings Utah, Eddie, Margie, Fannie, and Chocolate Rand of Raleigh, NC; ex-husband James Tharpe of Washington ,DC.

The family of Edith Rand Tharpe created this Life Tributes page to make it easy to share your memories.

Send flowers to the Tharpe family.