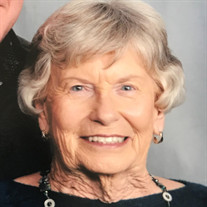 Carolyn Caldwell Perry Carolyn (Sue) Caldwell Perry, born on August 20, 1938 in Memphis, Tennessee, to the late Ina Wilson Caldwell and Enloe Pearce Caldwell, passed away at age 79 on May 22, 2018 in Cary, North Carolina. Carolyn graduated from East Memphis High School in Memphis, Tennessee and attended the University of Tennessee in Knoxville. Carolyn was married to the late Jimmy Jordan Perry in March 1959 and lived in both Tennessee and Mississippi before settling in Alva, Oklahoma. Jim and Carolyn Perry owned and operated Perry Tire & Alignment in the NW region of Oklahoma. Carolyn was also an accountant working ata local office as well as the family businessuntil her retirement in 1999. She then relocated to Lakeland, FL where she enjoyed her many friends and activities. Carolyn had a passion for travel and enjoyed a competitive game of bridge with her friends. Carolyn was very involved in the Alva Chamber of Commerce, serving as President. She was a member of St. Stephen’s Episcopal Church in Alva and then a member of All Saints Episcopal Church in Lakeland where she kept a busy schedule of volunteering. Carolyn loved her family very much. She was preceded in death by her son, Bruce Meredith Perry. Carolyn is survived by her daughter, Beth Perry Bowers and her husband, Gary, of Cary, North Carolina; her son, Brent Perry and his wife, Mendee, of Tulsa, Oklahoma; and sister, Jane Crawford of Arvada, Colorado. She was a cherished Nana to Britni Diacon Faircloth and husband, Jonathan, of Raleigh, North Carolina; Brooke Perry Nielsen, and husband, Kris, of Kansas City, Missouri; and BayliePerry, of Kansas City, Kansas. She was abeloved Nani to great grandson, Benjamin of Raleigh. She also is survived by nieces, Courtney Crawford Slater and Kristen Crawford Andreasen, of Texas and many cousins and extended family. A memorial service officiated by Rev. Dr. Larry Reid Hensarlingwill be held on Saturday, July 14 at 1:00 p.m. at All Saints’ Episcopal Church, 202 S Massachusetts Ave, Lakeland, Florida, 33801. Our memories will forever live in our hearts.

The family of Carolyn Perry created this Life Tributes page to make it easy to share your memories.

Send flowers to the Perry family.